My Favorite Mic: Laughter at the End of the World 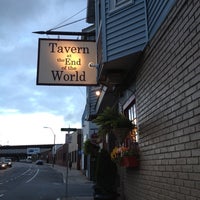 Image Source: foursquare.com
Laughter (Tavern) at the End of the World will always hold a special place in my heart. I’d read Phoebe’s eulogy of Grandma’s on UnScene after Googling “Boston comedy scene” and by the end, she’d mentioned the open mic she hosted. She discussed her love of open mics, the “baby jokes” people unveil that aren’t fully baked yet, and the community that grows around micing. I intuitively understood that I needed to experience what she was talking about. If I tried stand up and hated it, I never had to do it again. So my first time was at #mideastcorn but I began frequenting Tavern despite the trek it required (meaning: I had to take the Orange Line).

I love Tavern for many reasons, but not least because Phoebe hosts it (and Settlow and Mariel serve as beloved guest hosts). There weren’t—and aren’t—many women hosting mics, which is a shame because mic hosts are usually the first gatekeepers new comics encounter, even if opening that gate leads to dispiriting sets in front of bored onlookers. I was enamored with her energy, her positivity, and her indomitable presence in a room filled with mostly men. I’d usually hole up at the long table at one end of the room, which effectively trapped me there once others assumed the remaining seats. I couldn’t make it to the bathroom or the exit without substantially disturbing everyone near me. I didn’t care, though. I was happy to spend time with my dumb thoughts, my notebook, and whatever delicious concoction I’d ordered. It’s slightly embarrassing, but I’ve sampled the food at almost every Boston mic regardless of quality or price point and Tavern crushes it every time. They have a kale salad that will make you forget you’re eating kale. The toasties are a delicious take on paninis and their brunch is killer. Oh, you’ve never returned to the site of your latest humiliation for brunch later that week? Maybe you don’t have the temperament* for stand up. It’s delicious, affordable, and not at all crowded because why would an unassuming Charlestown bar serve brunch? I don’t know why, but they do. They’re magical like that.

Tavern was integral in developing whatever early chops I might have had (half of Boston comedy: “YOU DIDN’T. GO BACK TO CONNECTICUT.”) I used those four precious minutes to present the fakakta material I was working on at the time, which usually involved a) sex b) bodily stuff and c) being privileged. The more things change, etc. My first 5 included a joke about terrible sex advice from women’s magazines (“Trick him with your butthole!”) that did well at Tavern and its reception made me feel like a fucking genius. I believe that joke’s success earned me my first booked showcase (Christa’s inaugural Broad Appeal!) spot, but more importantly, it instilled in me the conviction that I could entertain people with my jokes. No costumes, choreography, or spectacle was required. Just a willingness to do sonic battle with raucous bar chatter and clanging kitchenware.

Besides the sets, the hang was legendary (IS legendary, though I can rarely make Tavern these days thanks to my schedule—hence the retrospective tone). There was a lot of, uh, hanging out in the parking lot with my new colleagues and shooting the shit. I had a transformative experience in which a fellow micer (PJ Noonan or JP Noonan – this conversation was literally the last time I saw him; come back!) explained his love of professional wrestling to me and the parallels between pro wrestling and stand up. We reminisced about the MTV show “Tough Enough,” because of course my only wrestling knowledge was reality television-related. Something clicked in my brain—I totally GOT IT, man—and from then on was less reticent to socialize with other comics. They were weirdos like me. Our interests and backgrounds might diverge, but we were all united in this comedy…thing.

I love Tavern and it’s only shown me love back. Is this a good time to request guest hosting? Phoebe, I’d appreciate the honor of guest hosting Tavern sometime. Feel free to say, “NO. GO BACK TO CONNECTICUT!”