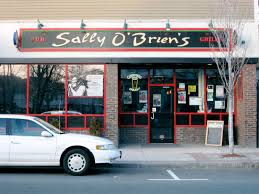 Image Source: somervilleartscouncil.org
Is there a better open mic to be a spectator at than Sally O’Brien’s? No. If your weird local comedy nerdom has become so severe (leave it to a comedian to devalue who appreciates them the most), that you want to watch an open mic, then Sally O’briens is the best one to watch. If you’re a comic who just got off your shift of being a glorified spreadsheet, is there a better mic to ease you back into the week of comedy ahead? Again, no.

“But it’s only three minute sets,” I hear you whine. Yeah it is! Why are you saying that like its a negative thing, composite of comedian who only expresses negative sentiments? As a comedian, there is nothing that sends me into a bottomless pit of despair like watching 5 minute sets at open mics. “Jesus (Hay-seuss) Christ, this is the third kid in seven that is trying to set the record straight on semen, but not before quickly mentioning that he went to a way better college than me.” Sally O’briens is 3 minute sets. That’s perfect. That is the perfect amount of time to polish a bit or two. It’s the perfect amount of time to hear yourself spew venom into a mic because you wondered if you’re “That type of comedian.” Then when you sit down, the rest of the comedians are only doing three minute sets.

But isn’t just fun to watch because the sets are only three minutes. Shawn Carter switches the orders and stacks each block of three comics with a mix of veteran and new, or a mix of talented and, “Well they’re out here trying it, so I have to give them credit.” In each block you know there is about to be someone who is at least fun to watch. You’ll laugh, wince and admire, but you don’t feel your stomach acid melting your organs as you wonder, “Why am I here?”

The food is good. The alcoholic service is licensed. But the best part is the mic takes place in a room that doesn’t force you to pay attention; it encourages you to pay attention. It is a spacious room with ample seating, but at the same time, none of the seating is too far from the stage. The room doesn’t really allow anyone to talk in a secondary location.

I was at a mic a couple months ago. There were 15 comics there. 2 people were watching the mic. The two people weren’t even comics. They were a lovely couple who probably loved stand up more than I do. None of the comedians were watching. I was disgusted by the fact that we (comedians) all agreed to come to this place to work on comedy, but all of us were in back in the bar area far out of sight and sound from the stage talking about some scrub comic that isn’t holding us back from improving our comedy. It was worse than no one watching. Why were we even there? We should have just gone for milkshakes and then penetrated each other with rakes.

I love that at Sally’s, you have to be a participant at the mic. You can be in your phone or looking at your notes, but you’re compelled to listen to comedians because the place is packed out and everyone is close to the stage. To seal the open mic contract of performance and reciprocal attention, Shawn Carter goes up at the beginning of the mic and tells everyone to please keep their head out of their notebooks and cellphones and, in his words, “If anything be overly-supportive.”

Have I looked at my cellphone while at Sally’s? Absolutely. I’m not going to not compulsively refresh my gmail until I feel nothing. But when my attention has been elsewhere for too long, Shawn’s plea at the beginning floats into my head and I put my focus back on the stage. This guy on stage makes me want to drive an ice-cream truck into the walls of a build-a-bear workshop, but I like who’s after him. And even if my set gave five people dissociative-trauma, at least I know I didn’t waste my time. I got a fair shot in front of an attentive audience.

One thought on “My Favorite Mic: Sally O’Brien’s”