My Favorite Mic: The Hideout 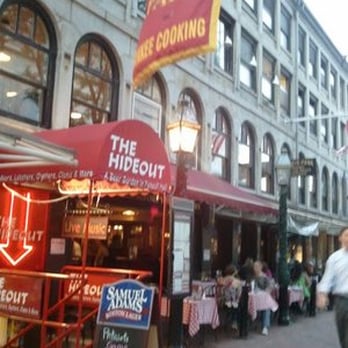 The first open mic I ever attended was at the Hideout. I was flirting with the idea of trying stand up, and someone I knew who did comedy invited me to a place where you could do it for free. Thursday night we went to a green-walled, low-lit basement bar in Faneuil Hall filled with two dozen people idly chatting and drinking beer. I felt like I’d been brought into some exclusive club, and though I couldn’t bring myself to write my name down on the list to perform, I eagerly stuck around to watch those who had.

The only thing I remember is a comic who went on, struggled for a minute or so and then, out of the blue, launched into an angry and swear-laden rant at the top of his lungs. At first I thought it was a bit, but I quickly realized he was earnestly losing his shit before our eyes. Eventually he simmered down and dejectedly made his exit. He got a loud and enthusiastic round of applause, bigger than any other act received. The host grabbed the microphone and said ‘wow, he stuck to his time.’ More applause. Then he called the next name and the mic resumed as normal.

I had no idea what was going on, but I’d never seen anything like it. Since then I’ve never seen a meltdown as thrilling as that night.

I’m at the Hideout often, and it’s usually always fun one way or another. It can be a tough room, which makes it a good room. The challenging part is all of the energy comes from the performer. While that holds true for most venues, it’s especially true at the Hideout. Maybe the looming history of downtown Boston gives people expectations of grandeur. Whatever the reason, it makes people have to REALLY try, and when comics really try something entertaining is bound to happen. A lot of hilarious bits are born at the Hideout and brought to different rooms to kill.

Every open mic has a cast of regulars who attend the room almost weekly. The Hideout has a number of these folks because it’s just a fun hang. The room is intimately close quarters so you wind up befriending others quickly. The bartender gives quality service (and usually gets more laughs than anyone who sets foot on stage), the hosts are welcoming to newcomers and old hats, and the comics share a demeanor of understanding and camaraderie with each other. If you snap mid-act, nobody will hold it against you.

A great thing about the Hideout is how large and enthusiastic the audience can be. Packs of tourists or other patrons from Faneuil Hall have occasion to wander downstairs, get into the comedy, and fill out the place as though it were a booked show. A group of Canadians who love jokes might laugh so much they turn a random Thursday into a real event. If unexpected clientele swarm the Hideout, the gang of comics gathers in back of the room and observes from a distance. If no other clientele appears and they are the only ones there…well, they still gather in the back of the room and observe from a distance. People drawn to stand up are also drawn to huddling in the backs of rooms.

At the Hideout, fledgling comics get the chance to stand on stage and work through their sets when things get rough. I like it so much because it’s the kind of place a newbie can learn how to get the right reactions. The most difficult part of doing comedy is carrying the show no matter how it’s being received. I can remember the guy from my first night that blew up and cursed out everything in sight (in fact I see that guy all over– he’s extremely funny). I can’t remember the ones who lost their momentum and resigned themselves meekly. There’s a lesson there somewhere.

Comedy is weird, and the Hideout is a place where comedy happens in all its weird, exciting, surprising forms. If you can roll with the good times and battle through the hard ones, you’ll start to sense that you’re getting better. And if you manage a good set, it’ll be the most gratifying set you do for three weeks.

On top of all that, they’ve got great food. Try the Reuben.