*Every week (ish) Rick uses a random word generator to pick a topic, and rambles on about it using related stories, thoughts, and questionable facts he thought he heard somewhere.  Once finished he’ll look up the actual definition and see if he was in the ballpark.

First off, if I have any regular readers (doubtful,) sorry for not posting last week.  It was Thanksgiving and I just didn’t have the time to write one up.  I tried to make up for it on Friday by putting one together in a hurry.  It was so short I decided I’d would just take the week off, I deserve it, after all I have been writing this article again for a soul crushing 6 weeks.   Anyways..   bullshot…

Sounds a lot like a word that I used too much (grow up, Canavan.)  Could it be a past tense of bullshit?  Like, that comic apologized for burning the light, but it sounded like bullshot.

That can’t be right.

Maybe when a bull eats rifle and a box of bullets and can then shoot at a rabbit in a matador costume?  That’s 2 Bugs Bunny cartoons I have brought up in the last month. 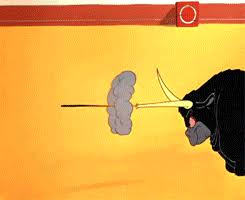 I’ve never totally understood why guns are feared in the Looney Tunes universe.  They don’t kill you, they don’t even seem to hurt.  If you get shot you just get covered in soot.  Why was Bugs Bunny fleeing from that bull after he ate a gun?  Was there no available place to wash up?  Was the matador costume a rental?

Bulls are just male cows, right?  I think so but I always doubt myself because they don’t really look that much alike in my head.  I guess they have similar builds, but Bulls look like they just came from a Ramones show, and cows look like they are wearing camouflage gear to hide in an old Chaplin Film.

OK, I have no idea what bullshot is, let’s find out together!  Or I’ll find out as I write this, and you’ll find out when you read it!  Or you already knew!

:  a drink made of vodka and bouillon
Are you kidding me?  People drink that?  Alcoholic gravy?  Gross.

We still see you…

If you are still reading this, thank you for reading this.
Bullshot
Previous PostDick Picks: Week 14. UnScene’s Weekly NFL Gambling Column – by Rich Karski. Next PostLove It Or Hate It / Christmas Music. - by Shawn Carter.

Rick Canavan is a stand up comedian. You can see him host a pretty fun show every Friday night at the Comedy Studio in Harvard Square.